The research was initiated by LEDinside with AVANTI conducting a survey with over 3000 online participants. The current information collected is used to understand the average consumer awareness of LED lighting, consumer buying habits, purchasing channels, brand recognition, and other factors that can influence the purchase of luminaries. 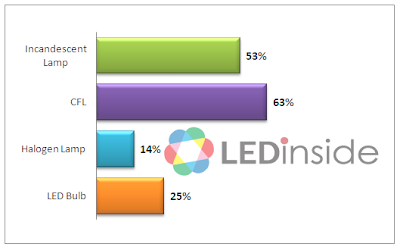 The research shows that the reason for such a low penetration rate is due to consumer awareness. The common consideration for the business world is whether or not LED lighting C/P ratio can surpass that of traditional lighting. Assuming that the above participants in the survey are rationally minded, have an ample amount of information, and have the ability to clearly weigh pros and cons, then the best consumption plan was used.

Yet, LEDinside’s investigation discovered that consumer awareness for LED is limited with only 25 percent actually having knowledge of LED bulbs. However, the 25 percent who knew LED where still unclear about the benefit of LED bulbs, power consumption, and price. And, 55 percent of people incorrectly believed that the power consumption was 11-20W（LED bulbs on the market are all 3W, 5W, 7W）. 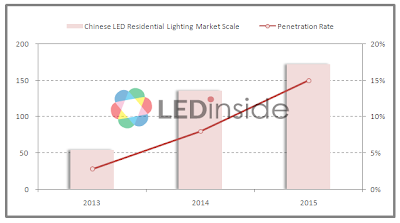 With the plan to have about 4 billion luminaries in the Chinese residential lighting market scale and penetration rate predicted to rise from 1 percent in 2012 to 15 percent by 2015, demand is expected to increase from 700 million to 1 billion with the next three years accumulated market capacity reaching 36.3 billion RMB. LEDinside believes that the key to opening up this vast market is clearly through increasing consumer awareness.
Posted by Pradeep Chakraborty at 10:00 AM

“The 101 Best Resources for Electrical Engineers,”

The 101 Best Resources for Electrical Engineers by Pannam, a leading producer of customized, U.S.-components! ;)