TAIWAN: Apple’s new iPad has arrived, and its influence on end market and component part product price is gradually taking effect. According to EnergyTrend, green energy research division of TrendForce, market demand for lithium polymer batteries is increasing due to higher power needs, which in turn is causing battery cell unit price to fall.

Apple products to stimulate Li-polymer battery demand significantly
The highly anticipated new iPad has finally arrived. It uses the same lithium polymer batteries as its predecessor, but to accommodate the increased power needs of the high-resolution display, 4G data transfer, etc., battery capacity has been upgraded from 2300 mAh to 3800 mAh, a 65 percent increase.

Lithium polymer batteries have always been highly customizable, but because of the wide variation and low volume of early mobile phones, makers were conservative in terms of capacity and supply. However, the improved hardware specification that has come with the popularity of Apple’s iPad, as well as the elevated power requirements of tablet PCs and smartphones, will benefit lithium polymer battery demand. 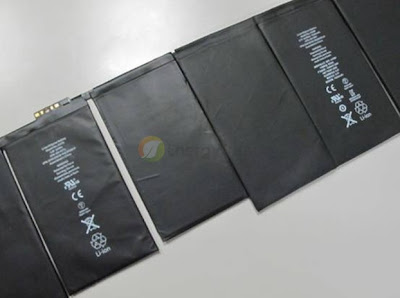 As for system design, the new iPad’s battery still consists of a one in series, three in parallel (1s3p) configuration,so there is little difference in the battery protection board. Battery pack yield rate will face a bit of a challenge, but overall the product trend is a boon to battery makers.

Large Li-polymer battery demand on the rise
Led by Apple, demand for large lithium polymer batteries has soared in applications from new tablet PCs to ultrabooks. In terms of the manufacturing process, there are no significant differences between large and small lithium polymer batteries – the yield rate difficulties caused by the thinner form factor is still the main issue. However, according to EnergyTrend, currently manufacturers have not yet hit a bottleneck in terms of production capacity.

Looking at Q2 2012 supply and demand, based on scheduled arrivals of new tablet PC and ultrabook models, demand will increase significantly. This will in turn raise the capacity utilization rate for battery product lines, and large lithium polymer batteries will begin to see significant price reductions.

Furthermore, according to EnergyTrend research, as many new products from manufacturers are still in the initial stages, there is enough capacity to meet demand. Thus, demand-induced price reductions are unlikely in the short term, but in the future when capacity increases, to the point that supply is tight, the industry will see price reductions – the situation will become clearer after Q2 2012.
Posted by Pradeep Chakraborty at 11:04 AM

“The 101 Best Resources for Electrical Engineers,”

The 101 Best Resources for Electrical Engineers by Pannam, a leading producer of customized, U.S.-components! ;)